A few weeks back we wanted to take the Mudbug on a back road adventure. I came up with a route to Hico, TX that would take us on unpaved roads. We got up early to prep the Jeep for the adventure. We took the doors off, removed the soft top, and were excited to get started. I hopped in the drivers seat, put the key in the ignition, pushed in the clutch, and it slammed to the floor without resistance. The clutch was gone.

After breaking down the front axle and accessing the damage we settled on the repair decisions. This was the perfect time to perform parts upgrades. When we had the rear axle upgraded by Redemption Offroad and the gear ratio changed, we did not upgrade the front axle. There were money concerns which prevented that upgrade. We knew there was a good possibility of the front axle breaking by not upgrading and it finally did.

Decisions To Be Made

At this point we had to decide what parts we were going to use for repairs. Cost would play heavily into this decision. The stock components had given out which means if we repaired back to stock it would probably happen again. Because of this we decided to perform some upgrades.

The first upgrade were the axle shafts. From the pictures on the last post you can clearly see the twisting that occurred. That twist was at the point where the axle shaft is inserted into the carrier. The stock shafts simply weren’t able to handle the level of wheeling we have been doing. I suppose we were fortunate they didn’t snap or there would have been even more damage. We upgraded the axle shafts to Ten Factory 4340 Chromoly axle shafts. This will be quite an upgrade from the stock axle shafts and hopefully be able to handle the larger tires and level of wheeling we are doing.

Next was the difficult decision about what to install in the differential. While it is broken down is a great time for upgrades. The only problem is it can get very expensive at this point. We wanted to install an E-Locker like we did in the rear axle. The Eaton locker runs right at $1000. As much as we wanted to upgrade to the Eaton locker, we simply didn’t have the finances at this time to do so. Another option was to rebuild the stock carrier with heavier spider gears. This would have cost us right at $200 and would have only made the carrier stronger. It would not have helped with traction to both tires when needed since it would still be an open differential. After researching heavily for a couple of weeks we decided on the Powertrax Grip Pro Extreme Traction System. This is a limited slip differential that will apply torque to the wheel that is not rotating. Basically if one wheel is slipping it will engage the other wheel so that both will be providing traction. This is an in between solution to an open differential and a locker. Cost did play into the decision. This carrier was $351 which was only a small amount over replacing the spider gears. The cost was also far less than the locker. It would also give us more traction in the front when off roading which will be an upgrade for us.

Other parts were more common that we replaced or added. We had to get new bearings and races for the carrier. We also added axle shaft seals to keep water out of the axle. The inner seals were recently replaced when we re-geared the differential and suffered no damage. The Yukon ring gear and pinion also suffered no damage which I was very pleased about. It was nice that the few parts we had upgraded were not damaged.

The rear axle still has to be dealt with. We did not build the rear axle. We had Redemption Offroad perform that work. They re-geared to a 4.88 gear ratio with Yukon ring and pinion gears, Yukon chromoly rear axle shafts, and an Eaton E-Locker in the differential. This was a costly upgrade but made a positive impact on the capability of the Jeep on more extreme offroading. At this point we don’t know exactly what is broke in the rear axle. We only know for sure one of the axle shafts snapped. After our next post on the front axle rebuild we will cover all the information about the rear axle.

After towing the Jeep home and sleeping on what transpired we had to make some decisions. We knew a lot of parts were broken. We didn’t know the extent though. I decided to wait until the following Monday and call Redemtion Offroad for some quotes. They built the rear axle for us so we knew some of those parts at least would have a warranty.

After discovering the broken bolt on the passenger side exhaust manifold I decided to go ahead and make the proper repairs. After removing the passenger side manifold I was greeted by a welcome surprise! The bolt was not broken into the block like the drivers side. There was still some of the bolt sticking out for me to grab. Using a pair of vice grips I was able to loosen it and even remove it by hand. This post has moved to https://ourjeepadventures.com/jeep-exhaust-manifold-continued/

A completely unplanned for upgrade took place last week. We had to get new tires on the Jeep.

Hot Springs ORV Park was a blast. It did however push us to make some more upgrades to the Jeep.

The Decision to Change Our Jeep Lift

As we adventure forth on our adventures in the Jeep we decided it was time to change the type of lift that is currently on our Jeep. When we purchased the Jeep it had a spacer lift on it. This is also sometimes referred to as a budget boost lift. It lifts the Jeep but doesn’t provide any extra suspension or flex capabilities. The spacer lift uses the stock coil springs that come with the vehicle. We were also concerned about how well those rubber spacers would hold up. Would they slowly collapse or dry out leaving us lower in some areas of the Jeep than others? Would they fall out under a heavy suspension flex situation? These were questions and concerns we had so the conclusion was to just replace them with a proper coil spring suspension lift. This post has moved to https://ourjeepadventures.com/changing-the-type-of-lift-on-our-jeep-wrangler/

This is a difficult question with a few things to consider. Since we are the ones who will decide when shopping for motorcycle parts it’s important to know a few key things.

First, you need to consider what you are looking for. By this I mean is it for a repair or better performance?  Second, will this affect my warranty? Lastly, consider your budget. END_OF_DOCUMENT_TOKEN_TO_BE_REPLACED 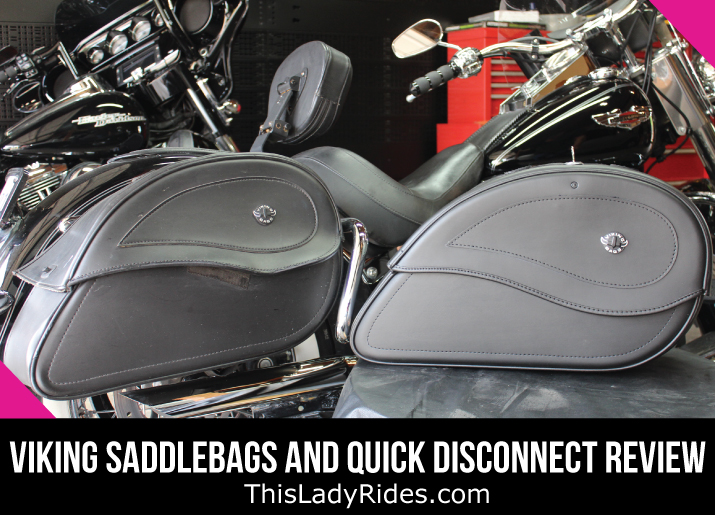 Almost five years, 14 states, extreme weather conditions and almost 40,000 miles. That’s what my former Viking saddlebags were able to handle. Is it any wonder why I decided to stick with the Viking brand?! Truth be told they probably have some more life in them but we felt several new features/options warranted upgrading. END_OF_DOCUMENT_TOKEN_TO_BE_REPLACED