The Water for Life event is one of the biggest events for Fort Worth Harley Davidson and Fort Worth HOG.  Scott and I arrived about an hour early to get some pictures and video of the staging area and take part in the poker walk.  When we pulled up we were counted as bike number 160.  It was early and the bikes were steadily rolling in.
We registered so as to be counted for the charity donation and began our poker walk.  It was a lot of fun as we got to see a lot of people we knew and get some good laughs in.  Neither one of us did well with our poker walk drawings though and had to move on empty handed.
As the time for the ride meeting neared Scott and I left early so we could get setup on Exchange street in the stockyards and get video of the bikes as they came by.  We parked in Rodeo Square which was reserved for the event and quickly walked to a pretty good area and setup the tripod with the GoPro.  Soon after we heard the squealing sirens of the police motorcycle escort as the procession began rolling down the street. It took 5 minutes and 55 seconds for the entire procession to pass.  When the last bike went by we quickly headed for the parking area to continue capturing media.
A total of 451 riders attended the ride.  I’m not sure about the number of bikes though seeing as some of them were riding two up.  One of the road captains said it was about 400 bikes though which is a great turnout.

We headed into Billy Bobs for the total tally and presentation of what the Water for Life charity is all about. The amount raised this year totaled 60K. 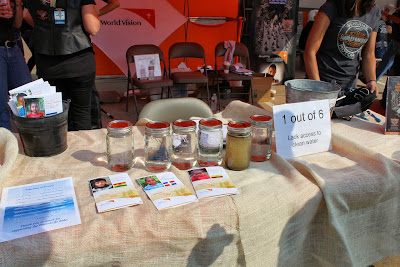