This weekend was super busy for both of us. Again, we had plans to do some work around the house but all of that changed when I got my new grips. Scott received the call from Fort Worth Harley that my parts had arrived earlier in the week so we went to get them Friday evening. When we got to the dealership they also had the saddlebag guards we had ordered. Scott then began whining a bit that Saturday would be a labor intensive day without rest, slaving away installing parts. During this whining along with the support of Nick, Patrick, Daniel, and Phil, I grabbed a set of edge cut saddlebag hinges off the shelf behind us for his bike and said that would be his payment for doing all the work.

Saturday was a parts installation day. We started with my grips and we decided to do our first video of parts installation. In the past we would post photos of the process so we wanted to mix things up a bit and see how it went. I wont elaborate here about it since the entire process is covered in the video. It did come out really good and I hope it can help someone install their own grips and adjust their throttle by watching it.

We also installed the saddlebag guards and saddlebag hinge covers on Scott’s bike. We also did videos of that process which he’ll work into future posts on Rumbling Rider.

Sunday was the Fort Worth HOG Chapter Picnic! This is an annual event and our second time attending. It is held at the Canyon West Golf Course in Weatherford, TX which is a beautiful place to have the picnic. We met at the dealership to line up for the parade ride to the golf course. This year the weather turned out very nice from the previous year. It was a bit chilly in the morning, 58 degrees when we left the house but soon warmed up to the mid 70’s. The parade ride went well, no traffic issues and it turned out to be a very pleasant ride to start the morning. Upon arrival those that wanted to ride the golf course staged while others parked their bikes. This is a unique opportunity that Canyon West allows us. We ride our bikes on the cart paths for all 18 holes and stop on the 9th for a photo shoot of the Chapters members. It’s a whole lot of fun and brings a good laugh to be able to do this. Golfers are taking pictures of us and waving as we ride on the cart paths while were waving and taking their pictures in return.

Next on the agenda were bike games! We love the bike games. We are a motorcycle riding group thus bike games only make sense! There were 5 bike games offered and Scott and I did all of them. I was very proud of myself because I competed in the single rider slow race even though I am still new to riding. I told Scott that i didn’t want my fear of trying something new on a bike to keep me from doing it. The bike games included a single rider slow race, couples slow race, ball drop, road kill toss, and weeny grab. We did well again this year taking 1st in 4 of the 5 bike games.

After the games, there was a yummy lunch and home baked sweets to satisfy our hunger. Shortly after eating lunch the monthly Chapter meeting was conducted, prizes for the bike games, and raffle ticket prizes were given away. The day concluded with a water balloon toss and a poke and run game. Scott was the unfortunate victim that broke the water balloon and got wet.

We rode home and relaxed from all of the excitement. We were both tired and didn’t even take time to download our pictures for the blog. Scott  didn’t even take the GoPro this time. For whatever reason, he didn’t want to keep up with it or worry about taking video. He just wanted to enjoy the day, spend time with Chapter members, and have fun. I did however take the camera and managed to snap a few shots. 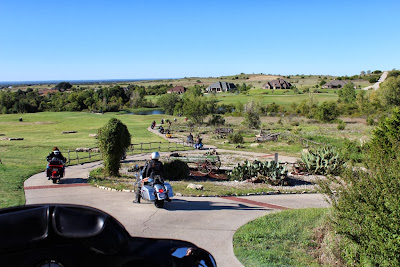