First I am sorry it has taken me so long to get this up! October is a really busy month for me with work and on top of that Scott and I have taken on several projects around the house. That means sometimes the blog post don’t go up as quickly as I would like.

Fort Worth HOG Chapter Picnic, it is without a doubt an event I look forward to!  This was my third year to attend, second on my own motorcycle. As in previous years it was an exciting and fun packed day! 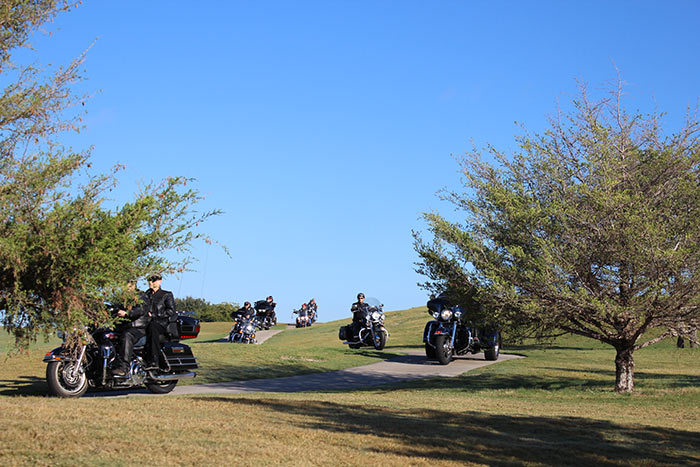 The morning started off a bit cold so we were pretty geared up, at least I was! We met at the dealership and rode as a group out to Canyon West Golf Course. The fun always starts off with a one-of-kind ride; we ride the motorcycles along the cart path, all 18 holes! I went ahead and parked my bike for this and hopped on the back of Scott’s. I like being able to get pictures along the path and you can’t do that and maneuver the bike.  I think most of the golfer’s enjoy it as much as we do. Each year we stop at a waterfall area and take a group picture. I was thankful for the stop because I really needed to stretch my legs. I forgot what it was like to ride as a passenger. 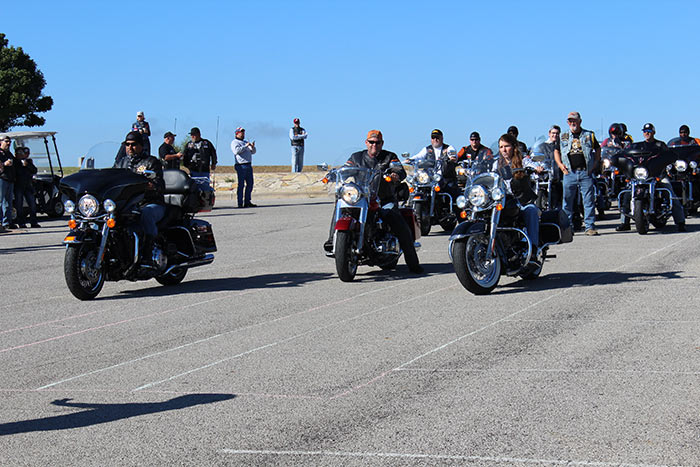 After the golf course ride we began the bike games. Scott and I each signed up our bikes for the Slow race. The slow race is the only solo event; I am not great at it but I was determined to try! Going as slow as you can is a lot harder than it looks and if you put your feet down you are out. I made it to the end without putting my feet down but was just a tad to fast to win. That’s okay there is always next year!  Scott however did a great job at the slow and steady and took first prize. 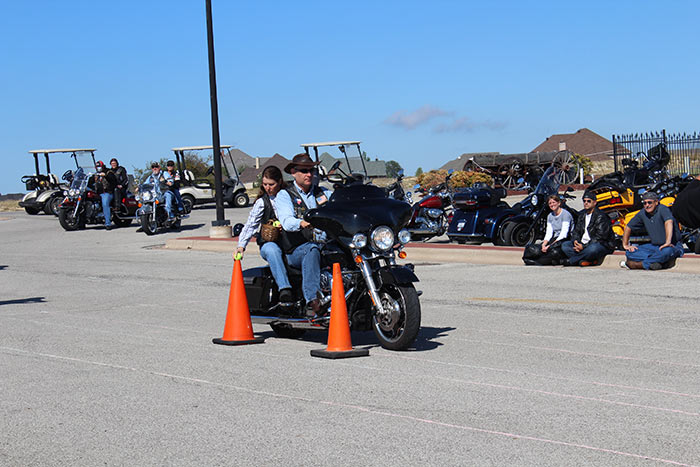 After that every event  was as couples: 2 up slow race, ball drop, road kill toss, and wiener bite. I enjoy all of them except the road kill toss. You have to wear these goggles that distort your vision and it really messes with your mind , or at least it does mine! Beth, was sweet enough to take some pictures of scott and I as we participated. Thank you, Beth! Scott got some video of the wiener bite and road kill toss. It really is hilarious to watch!

As mentioned about riding the cart path most of these games were done with me as the passenger. It definitely was different being on the back of the bike and having no control over it. My legs cramped more and it was hard to remember to be still! Often times people assume the passenger can do whatever they want back there but in actuality every move they make can affect the bike, especially when trying to go slow! The other thing is the view; as a passenger your view in front of you is obstructed by the rider. I noticed this a lot when I was taking pictures.

After the games finished up we had lunch and our monthly chapter meeting. Prizes were given out along with the raffle ticket drawings. Scott and I won 3 out of 5 events so we were pretty excited about that! 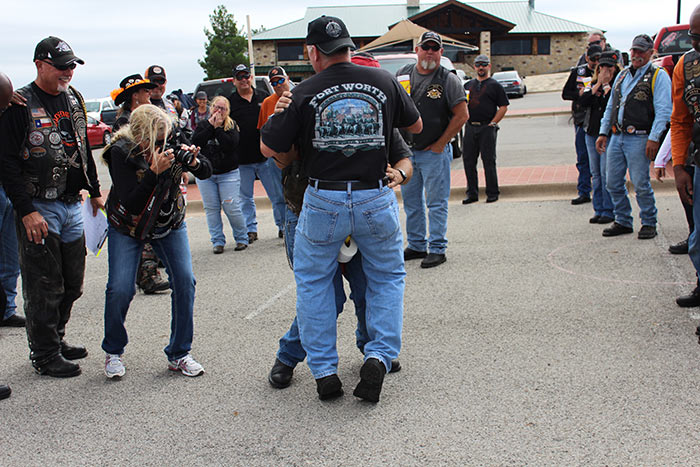 There were 2 non riding games after the meeting consisting of poke & run and a water balloon toss. This year the men carried the poker while the woman held the toilet paper roll. Scott and I didn’t make it very far in the balloon toss, I think he wanted to see it pop on me!

It was a great day and I am very thankful to our HOG chapter, Fort Worth Harley and of course our road captains and officers for all the time and effort they put into making it such a great day for all of us. On the ride home I kept replaying the day in my head and as I stretched out my legs realized how nice it was nice to be back on my bike!  Scott is a fantastic rider and I always makes me feel safe but I like riding my own too!

I have heard many women say they don’t want to give up the comfort of riding as a passenger but if you haven’t ridden yourself you have no idea what you are missing.  There are advantages to both, what woman doesn’t want to wrap her arms around her man and enjoy the view around or have fun playing bikes games at an event. On the flip side is being able to control your bike yourself, an unobstructed view, even the feeling of leaning into a corner or curve feels different as the rider and I can always wrap my arms around Scott at the next stop!

Either way you go, rider or passenger, enjoy the ride and stay safe!

I took a LOT of pictures and instead of picking and choosing I went decided to just upload them all. Some are a little blurry because they were taken from a moving motorcycle as I tried not to move too much. If you find yourself in one feel free to copy it. If you choose to post one online please link back to my site or at least give This Lady Rides credit for taking the image. Scott’s video of the event can be found in his post on Rumbling Rider: Fort Worth HOG Chapter Picnic 2014 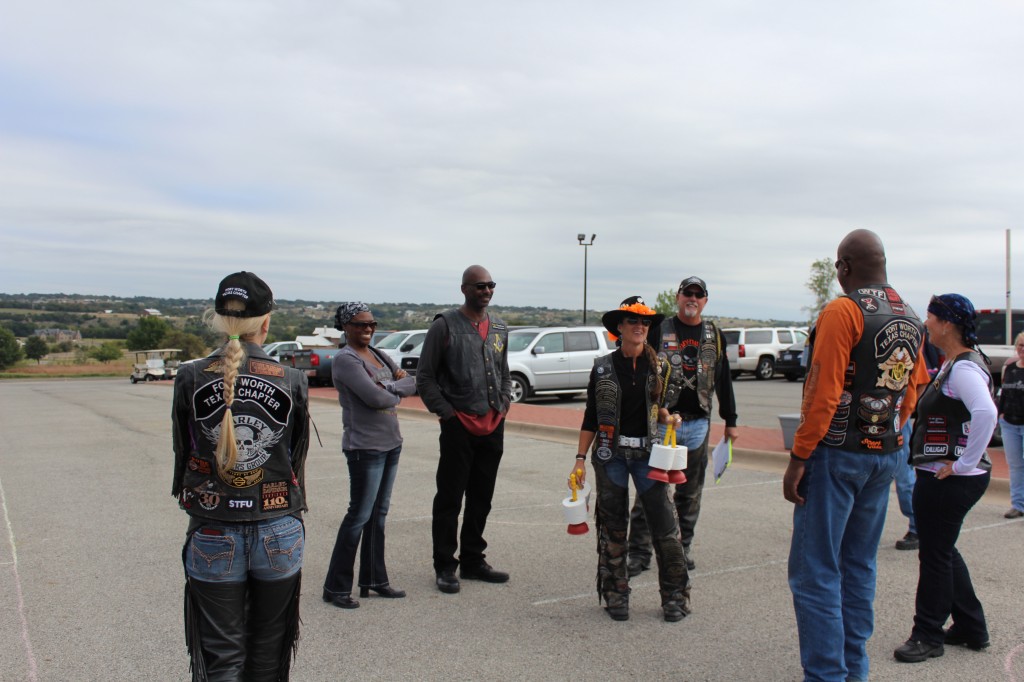