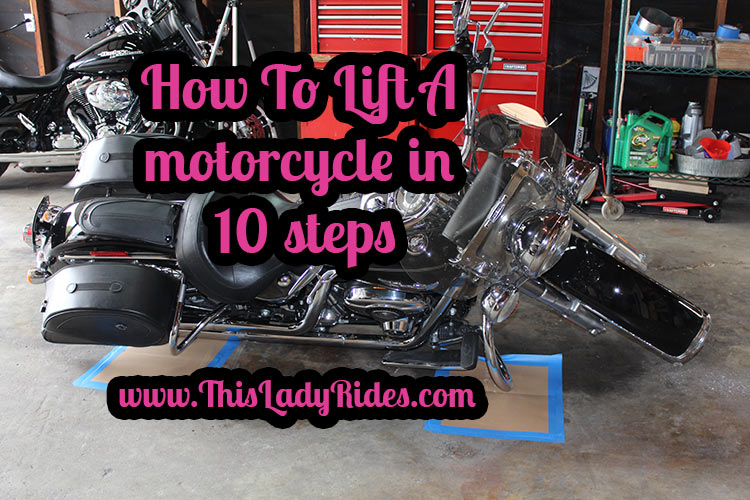 Most of us have witnessed this scenario at least once since getting involved with motorcycles: someone drops his or her motorcycle, and three or four people scramble over to help muscle it upright. In fact I witnessed it just this past weekend. Whenever I see that happen I wonder what the person plans to do if they drop it out on the road and are alone. I for one don’t want to sit on the side of the road or in the middle of a lane waiting for help.

I have mentioned before that I am fortunate to belong to a very supportive H.O.G. chapter sponsored by an awesome dealership, Fort Worth Harley Davidson. Fort Worth Harley routinely holds what are called garage parties. At these garage parties attendees are shown the proper way to lift a fallen motorcycle and then given the opportunity to try it out on a Road King! I attended one of these parties about a year before I began riding and took the challenge. I found out I was able to lift the Road King! As you can imagine it was a huge confidence boost!

That opportunity meant that when I began looking at a motorcycle of my own I didn’t let the weight of the motorcycle intimidate me or guide my purchase. It was a little funny when people heard I was looking to buy a motorcycle, about half of them said “make sure you can lift it”. Now, when Scott was looking for a motorcycle no one told him that and I have seen men my size riding Street Glides. Do you think anyone cautioned them about weight or size, probably not.  I knew they meant well though so I just smiled and said I would keep that in mind. Of course I already knew I could lift a Road King that weighed 810 pounds.

Aside from every rider knowing how to lift a motorcycle I think passengers should be able too. The reason being if something happens and the rider is unable to lift the bike the passenger would be able to aid them. The scenario that comes to mind is what if there is an accident and the rider is trapped under the bike, hurt or unconscious. Again, I would want to be able to help.

The 10 steps to picking up a motorcycle

Step one: Make sure the engine is off. If not hit the kill switch. If the motorcycle is down on the right side put your side/kick stand down.

Step two: Walk around the motorcycle making sure the motorcycle isn’t leaking any fluids or has damage that would make lifting it dangerous. While doing this make sure there are not any rocks or debris in the way. If there is move it.

Step Three: Ensure that the bike is in gear to prevent it from rolling once you start getting it upright.

Step Four: Turn the handlebars to full-lock with the front wheel pointed into the ground. One handgrip ends up close to the gas tank – right where you want it.

Step Five: Squat gently with your butt/lower back against the motorcycle seat. The bike may rock/pivot a bit underneath you, that’s ok

Step six:  With one hand, grab the handgrip closest to the bike.

Step seven:  With the other hand, grab a hard part of the bike such as saddle bag guards, the frame or fender.  Be careful to avoid hot parts and soft parts (plastic, turn signals, hoses, wires). Use gloves if necessary.

Step Eight: It’s time to lift the bike. Use your leg muscles. Lock your arms and take very small (baby steps) backward, keeping your back straight. Maintain control of the bike and do not twist your body while lifting.

Step nine: Rock the bike to get a little momentum ( I show what I mean in the video)

Step ten: If the bike was on its left side … be careful not to lift too much and flip it onto its other side! Once it’s upright, carefully put the sidestand down with one foot. Lean the bike safely onto its sidestand. Check for damage before you ride it again.

I know it sounds like a lot but by watching the video you’ll see it isn’t.

People think that you have to be big to lift a motorcycle, the truth is you just have to use your leverage and for most of us, especially woman, that is in our thighs and legs. I hope you enjoy the video and consider giving it a try if you are able. I mentioned in the video but want to repeat if you have had neck, back, or knee injuries don’t do it, call for roadside assistance. If you do decide to practice I would advise putting something down on the area where you guards are going to hit so avoid scratching them.