This week-end there wasn’t much getting around the need to do some maintenance work on the bikes and install some new hardware. Looking back at the last couple rides a problem we’ve been having is storage space. Scott is having to carry everything for both of us in his saddlebags.  We had found bags for my bike last month that I liked from Viking Bags so we went ahead and ordered them. Last week we decided to stop by Fort Worth Harley while we made our weekly grocery rounds.  We ordered some saddlebag guards for my bike and a reduced reach clutch and brake handle too.  I have been struggling with the reach on my controls since getting the bike so we had to do something for me. Of course these are all things you discover as you ride your bike and one of the downsides to being 5′ 1″, most things just don’t fit without a little modification. We also picked up a few things Scott had been eyeing for his bike.

Here is a list and then well go into more details about what worked, what didn’t and how we made things work.

We started with the hand grips on Scot’s bike.  This will be the second set he’s put on.  The last were nice but just didn’t have the right feel to them.  They were kind of short and his hand would overlap on the end. They also didn’t give his hands good support for longer rides. Our salesman said to try Avon Grips. He was so sure Scott would like them they spent 10 minutes walking around the dealership until they found a bike with Avon grips on it.  Like he said, they felt superb so we ordered a set that had the Edge Cut style like his clutch and brake lever. It takes about 10 minutes to install them. Here are the pics of the process. 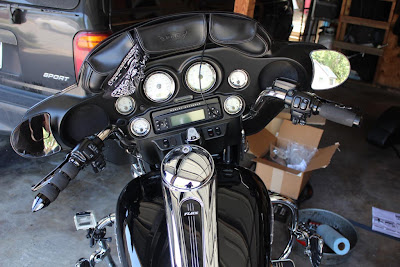 Then we did an oil change  and air intake filter cleaning on the Street Glide. Next we worked on putting the Saddlebag Guards on my bike.  There was a little bit of tear down on the right side installation.  Had to nearly remove the entire exhaust system to get the lower mounting bolt installed. Not a big issue though.  After installing the guards is where it all fell apart.  We bought some saddlebags from Viking.  We didn’t like the Harley’s softail deluxe bags.  They are an extremely poor design and have the capacity to hold little more than a shoe on each side.  That wont do much for any type of trip we might want to take and they are expensive, over $1000 from what some people in our chapter told us they paid.  The bags we purchased are super nice and almost as big as my Street Glide bags.  A molded plastic shell covered with leather gives them rigidity and style.  Both of us are quite impressed with them and they were only $219.00.   However, the mounting kit that came with them just sucks. The left side support provided is completely useless as it will not clear the drive train. Not only that but the bolts they provided had the wrong type threads so they wouldn’t screw in and were waaaaaay too long. We went to Harley and ordered a nice single piece mount made by Drag Specialties for $60.

The saddle bag supports arrived Tuesday so we picked them up and hurried home to see if they were going to work. Again, more issues.  We figured this would happen since we are using non Harley parts.  The supports fit perfectly and clear the drive train but they angle outwards from the fender.  This means the bags wont hang straight.  Scott’s idea was to find some barrel spacers for the mount and use longer bolts.  Off to Home Depot we went.  It took a while to find exactly what we thought might work and get back home.  Scott put the supports on and held the bags into place while I marked where the mounting bolts came to on the bags.  Got out the drill and made the holes.  We put a large flange washer that Scott painted on the inside and outside of the bag, the mounting bolt through those, then the barrel spacer over that, then the support which bolted perfectly in place, thus holding the bags very securely. They still lean outwards a bit but not bad enough to get worked up about.

We still had to figure out how to mount the bottom part of the bag to the support.  We didn’t want to drill holes so we came up with the idea of using velcro. We used the plastic part of the velcro on the bag side and simply stuck it on.  That stuff is super hard to get off once it sets. Not really sure how to explain how I was able to attach it to the support but you’ll see it in the pictures.  All were trying to do is keep the bag from rattling against the bottom of the support, the huge bolts hold the bag on very securely. It all worked well and we still got her some very nice bags for a total cost including the new supports and Home Depot hardware for under $300 which I am very pleased about. 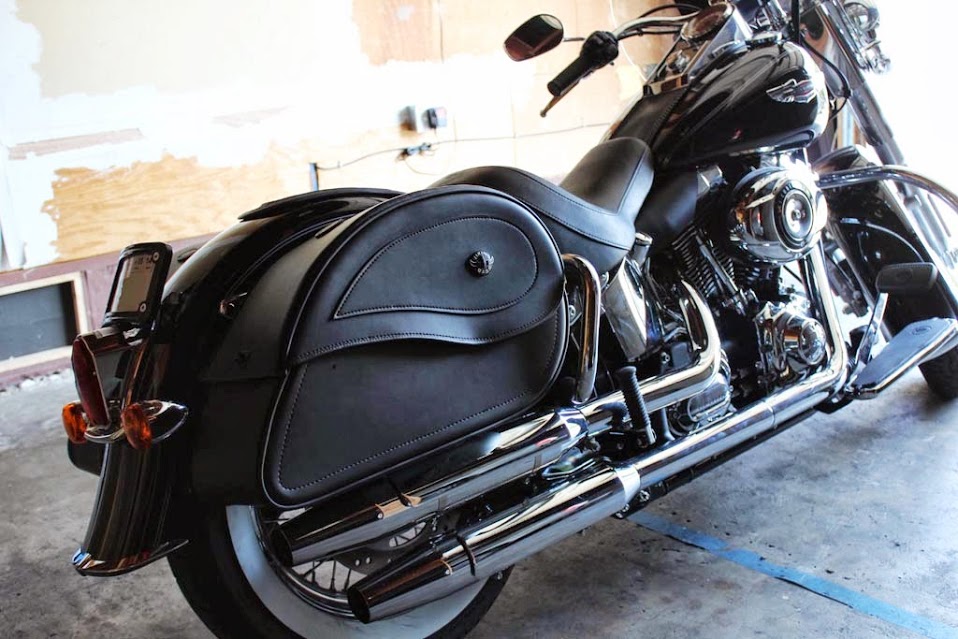