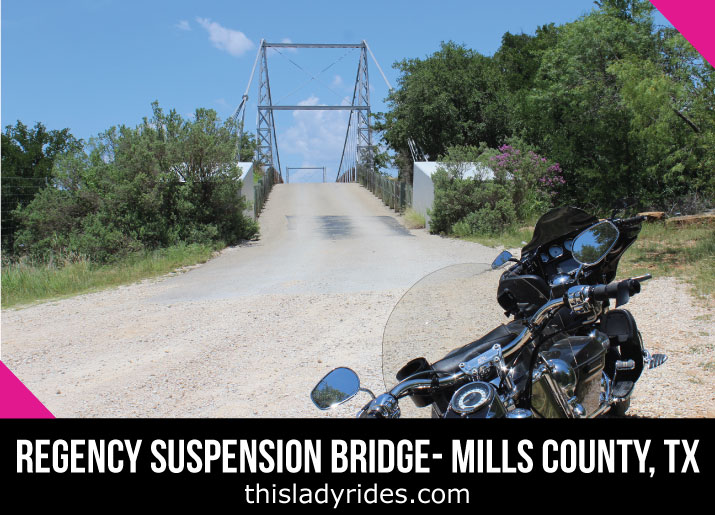 Last weekend we took a ride that we’ve wanted to take for five years! We finally made it out to ride the Regency Suspension Bridge near San Saba, Texas. This is the last suspension bridge in the state that is still open to automobile traffic. We tried to find this bridge almost exactly five years ago when I first began riding. After being given bad directions on a day that was around 100 degrees we gave up and headed home.

It’s probably a good thing we didn’t find it that day because I’m pretty sure I would have frozen up when I saw the gravel road you have to take to get to it. Fast forward five years: armed with a great route map that Scott put together for us and my ability to ride down a gravel road we finally have this marked off our ride list!

Built in 1939, it crosses the Colorado River and connects county roads 137 and 433. The bridge has a span of 325 feet and a wood surface. An earlier bridge was constructed in 1903 to serve ranchers and farmers going to market, but fell in 1924, killing a boy, a horse, and some cattle. A later bridge built in 1936 washed away in a flood.

The Regency Bridge was restored in 1997, with then-Governor Bush attending the re-dedication service. This was a major event for the community of around 25 people.

Local teenagers accidentally set the wood surface on fire on December 29, 2003, burning a hole in some planks and causing $20,000 in damage. The bridge was repaired and reopened to traffic in early 2005. After closing in late 2014, the bridge is once again open to traffic.

In 2005, the Regency Bridge became the last suspension bridge in Texas open to automobile traffic.

In order to get to the bridge, you do have to go down a gravel road a little over a half-mile. Just take your time, don’t grab your front brake and watch out for large rocks. Make sure you keep an eye on the weather also prior to going. You don’t want to head down that dirt and gravel road when it has been raining.
If you’re interested in the route we took you can find the route here: Riding Routes